Skip to content
Home News and Events On the last Kumbh day, 400 deities from across state to ‘bathe’ at Haridwar 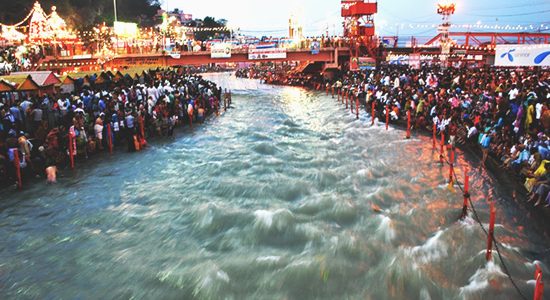 On the last Kumbh day, 400 deities from across state to ‘bathe’ at Haridwar

Riding palanquins, images of about 400 local deities will be brought to Har-Ki-Pauri at Haridwar on April 22 along with lakhs of devotees for the last major bathing day of Ardh Kumbh.

Before the practice of a collective divine bath was initiated at Kumbh 2010 in Haridwar, the deities were taken in processions at different places and bathed in rivers. This is for the first time that the religious practice will be followed at an Ardh Kumbh, organizers said.

Devbhomi Lokasanskriti Shobhayatra Samiti president Mohan Singh Gaonwasi told TOI on Monday that the ‘Devadoli snan’ will be the concluding key bathing day of the Ardh Kumbh. On April 21, after Ganga puja at Triveni ghat in Rishikesh, the procession of images of 400 local deities riding palanquins will reach Shyampur and Satyanarain on the way to Haridwar. The procession will conclude at Bairagi camp in the holy city for the night. Next morning on April 22, the deities will be taken to Har-ki-Pauri in a “grand procession” for the snan. The procession, accompanied by musicians playing traditional musical instruments from Uttarakhand, will see participation from lakhs of devotees. The procession will also carry copies of the four Vedas, the Gita and Puranas. After the snan is over, the deities will be taken to Pant Dweep adjoining Har-ki-Pauri for devotees to perform various rituals and puja.

The date for the snan was decided in consultation with astrologers who said that April 22 was particularly auspicious, Gaonwasi said.“Consent of the deities was also taken for the snan through the priests in their temples,” Gaonwasi added. Among those expected to attend the festival include ex-CM Harish Rawat, R P Nishank, and BJP MP Mala Rajalakshmi.A week-long religious fervour will be witnessed in the state as havans, pujas and feasts are organised when the deities return to their respective temples, said Gaonwasi.