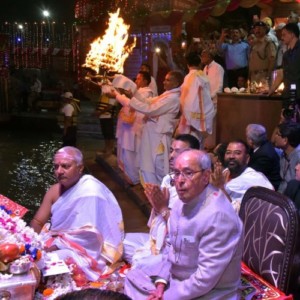 On the third day of his visit, President Pranab Mukherjee offered prayers and took part in the famous Ganga aarti at Har-Ki-pauri. After the rituals, Mukherjee was accorded a warm welcome by priests and office bearers of the Ganga Sabha. In the Ganga Sabha visitors book, the President wrote: “I was overwhelmed to see the Ganga and participate in the evening aarti. It gave me immense pleasure.”

Ganga Sabha president Purushottam Sharma Gandhiwadi, general secretary Ram Kumar Mishra and secretary Ashutosh Sharma presented a rudraksha mala and silver gangajali (small pitcher) to Mukherjee. Governor K K Paul and chief minister Harish Rawat, who were accompanying the President, were also honoured by the sabha. The administration also relaxed restrictions on the presence of pilgrims and local residents at Har-ki-Pauri. People were allowed to offer prayers at the banks of Ganga and entry was restricted only on the ghat where the Ganga aarti is performed.

The helicopter carrying the President landed at the BHEL stadium in the city at 5:15 pm. From there, his cavalcade reached the Damkothi government guest house and at Har-ki-Pauri in the evening. With a batch of priests assisting him, Mukherjee performed Ganga pooja and then participated in the Ganga aarti. The President then left for the Jolly Grant airport to return to Delhi by a special IAF aircraft.

On Wednesday, the President had paid obeisance at the Kedarnath shrine. Mandir Samiti chairman Ganesh Godiyal had welcomed the President by offering him eleven Brahmakamals (a variety of lotus) and a replica of the idol of Kedarnath.

It was the President’s first visit to the centuries-old shrine after assuming office. Two of his proposed visits to the temple in the past were cancelled due to bad weather conditions.
During his visit, Mukherjee also took stock of the reconstruction work carried out at Kedarnath which bore the brunt of the June 2013 flash floods.